The great scientist of 19th and 20th century Islamist Sheikh Muhammadsulton Masoomi Khujandi was 8(eight) thousand copies of books, and his grandson – the Honored worker of science of Tajikistan, doctor of economic Sciences, Professor Nazarov Abdushukur  Abdurakhimovich also there are about 8(eight) thousand books.

Was the old idea of Professor Nazarov A. A. to build a private – personal library and his books were used by young people, residents of the city of Khujand and Sughd region.

The private library of Professor Nazarov Abdushukur Abdurakhimovich was called also by the name of his grandfather, Sheikh Muhammadsulton Masoomi Khujandi, to perpetuate his memory.

The main purpose of the library to encourage young people to become readers of books.

Another goal of the creators of the library is based on selection among 10 and 11 fifth graders how school students, to identify talented young people from poor families who do not have the economic ability to continue education and to develop their human capital through the organization of free courses, workshops and meetings with prominent scientists, statesmen and leaders of manufacture, as well as leaders in business.

September 30, 2011, in a festive atmosphere, the first brick of the building of this library was laid by the First Deputy Chairman of Sughd by Professor Sanginov Jumaboy Rakhmatovich.

The library building was built in the traditional Tajik style, combined with elements of modern architecture.

The library has the status of a private library of a name of Sheikh Mukhammadsulton Masoomi and Professor Nazarov Abdushukur  Abdurakhimovich.

The library was founded, approved by Ministry of culture of the Republic of Tajikistan and the Department of culture of Executive body of state power of Sughd region in April 2017. 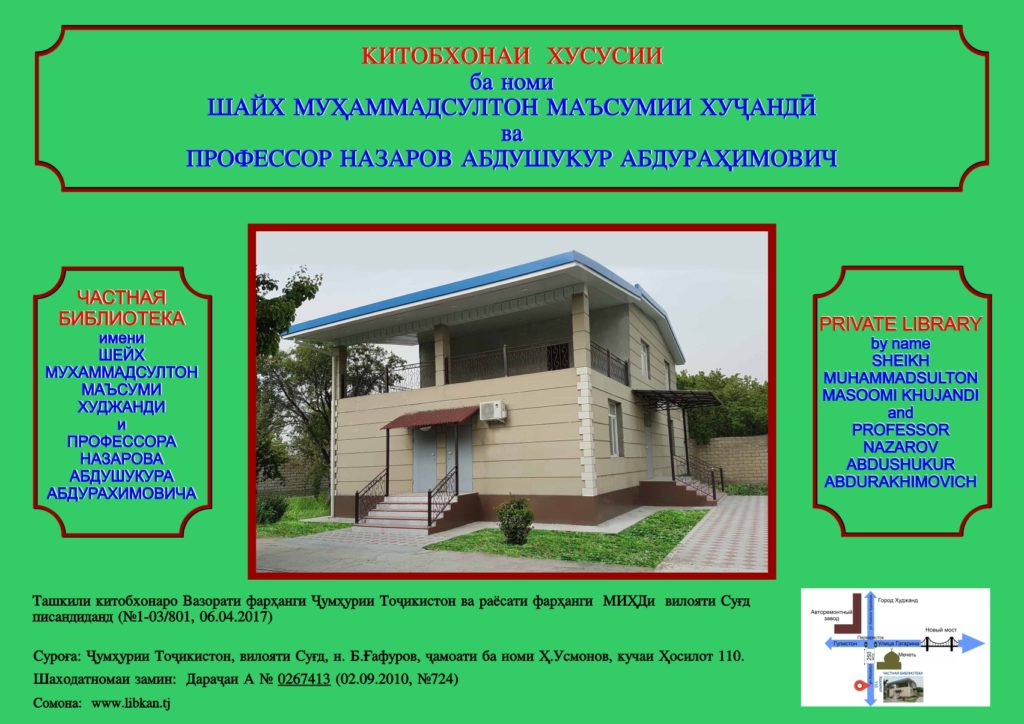 The library has 3 reading halls which can cater for 60 readers.

In the private library today houses more than 8 thousand copies of books and other publications.